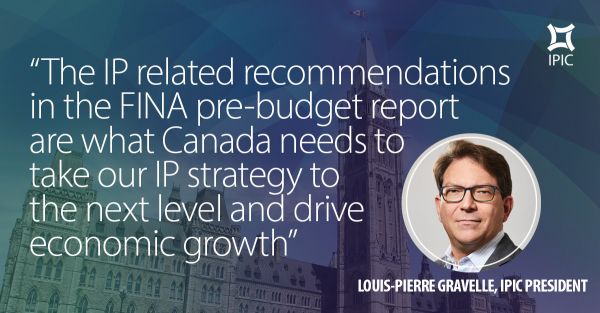 Late last month IPIC President Louis-Pierre Gravelle was invited to present before the Standing Committee on Finance (FINA), and Member of Parliament Julie Dzerowicz, on IPIC’s recommendations for the 2022 Federal Budget.

President Gravelle was part of a panel of key innovation stakeholders assembled by MP Dzerowicz. Given the short time frame for FINA to hear from stakeholders as part of their pre-budget consultations, MP Dzerowicz was charged with assembling the panel and communicating the relevance and importance of these recommendations to the committee.

IPIC’s full Submission for Pre-Budget Consultation in Advance of the Upcoming Federal Budget can be found here.

Following the consultations the Standing Committee on Finance (FINA) released its Pre-Budget Report to Parliament titled Considering the Path Forward. IPIC was pleased all of its proposed recommendations, outlined below, were included within the report.

The report was released on March 21st and while the window for inclusion into the upcoming Federal Budget (rumored to be released as early as next week), IPIC remains hopeful the interest that followed its recommendations at the pre-budget consultation will result in favourable IP and innovation policy initiatives.

IPIC would like to thank the Standing Committee on Finance (FINA), its Chair Peter Fonseca, Member of Parliament Julie Dzerowicz, Deputy Prime Minister and Minister of Finance The Honourable Chrystia Freeland, and Minister of Innovation, Science and Industry The Honourable François-Philippe Champagne for their invitation, their ongoing collaboration on IP issues, and their support of IP and innovation in Canada. 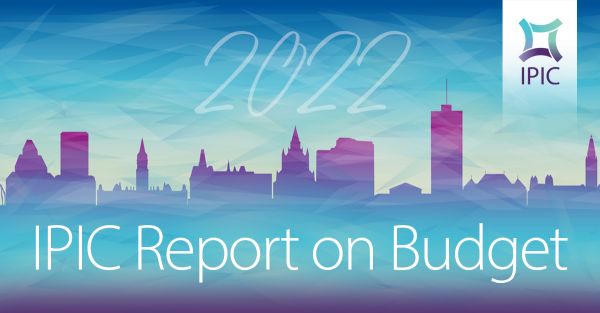 IPIC was pleased with the government’s commitment to study IPIC’s recommendation for a patent box tax incentive, however, it is clear much work is left to be done to gain the government’s support on the importance of other IP incentives, such as First Patent Program, a Brand Protection Strategy, and other IP subsidies and policies IPIC has advocated for over the last few years.
Topics

Deadline to Nominate an IPIC Member of Distinction is Monday!

The IPIC Member of Distinction Award aims to recognize IP professionals who have made a significant contribution to the Institute over at least 20 consecutive years. For those with more short-term involvement, the unique and impactful nature of the contribution must be emphasized.
Topics