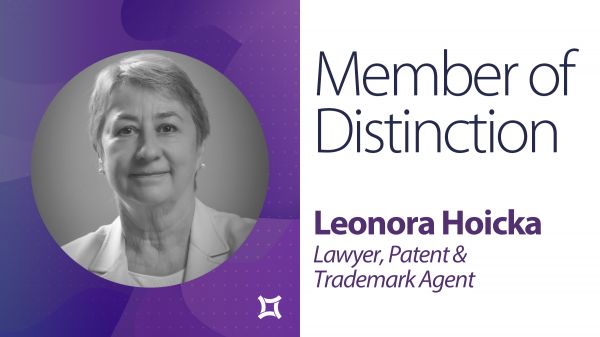 The IPIC Member of Distinction Award aims to recognize IP professionals who have made a significant contribution to the Institute over at least 20 consecutive years. The individual will have demonstrated significant leadership, commitment, and dedication to increasing awareness of IPIC and the IP profession in Canada. IPIC’s Board of Directors is pleased to announce that Leonora Hoicka is this year’s recipient of the Institute’s Member of Distinction Award. Leonora Hoicka received the award on September 30, 2022, for having made significant contributions to IPIC.

As a previous President of IPIC, Leonora knows firsthand the importance of IP. We are honoured to have had her as part of IPIC's Board as a Councillor, Executive, and President. We thank her for her service of over 20 years with IPIC and for her involvement in several committees, including the Patent Joint Liaison Committee with CIPO and the International Patent Issues Committee. In addition, we are appreciative for her extensive work with the Self Governance committee and Patent Agent Examination Standards Committees. Leonora has demonstrated significant leadership, commitment, and we are grateful for her continuous dedication to increasing awareness of IPIC and the IP profession in Canada. – Louis-Pierre, IPIC President and Chair of the Board, 2021-2022

Leonora Hoicka is a lawyer (Ontario and New York) and registered Canadian patent agent and trademark agent. Starting in private practice with Ridout & Maybe in Toronto in 1983, she joined the Intellectual Property Law department of IBM Canada Ltd. in 1993, eventually moving to IBM Corporation in New York in 2007. With IBM, Leonora performed a number of global roles including managing IBM’s worldwide software patent portfolio and IBM’s patent and trademark portfolios in Canada, Mexico, the Caribbean and Latin America. In New York, she served as IBM’s Chief Trademark Counsel for over a decade and as Associate General Counsel for IP responsible for patent enforcement and licensing, and for IBM’s Watson AI business unit. She retired from IBM in late 2020.

I’m very honoured to be recognized with this award and considered in the company of many of the trailblazers of the intellectual property profession Canada. These forerunners have inspired my career and my volunteer work with the Institute. – Leonora Hoicka

Throughout her career, Leonora has been a member and avid supporter of IPIC, as well as other intellectual property associations for which she was a frequent speaker. With IPIC, she was fortunate to participate on and, in some cases chair, several committees, including the Patent Joint Liaison Committee with CIPO in the mid-1990s, the Patent Cooperation Treaty Committee from the late 1990s to the mid 2000s during a period of intense PCT reform after the extension of Chapter I, and the Self Governance and Patent Agent Examination Standards Committees for over two decades.

For several years, the Standards Committee worked with the Patent Agent Examination Board and an experienced psychometrician to bring fairness and consistency to the patent agent qualifying examination. The Self Governance Committee (now called the Professional Regulation Committee) was a driving force behind obtaining statutory confidentiality (privilege) for the communications between Canadian agents and their clients, as well as the formation of the College of Patent Agents and Trademark Agents (CPATA) on June 28, 2021. The College resulted from consultations over many years with the Canadian government, including participation in CIPO’S Working Group on Modernizing the IP Community in 2013 and 2014.

Leonora was privileged to be elected by the IPIC membership to the IPIC Board as a Councillor and then to the Executive, and served as President in 2008-2009. With the formation of CPATA, Leonora was able to volunteer her services to assist the College in the transition of the patent agent qualifying examination from CIPO and in its patent agent competency project which is ongoing. In April 2022, Leonora was elected to the CPATA Board as one of four members chosen by the licensees.

Leonora is a credit to her profession. She was a trailblazer, the first woman professional at Ridout and Maybee and the first woman to be hired into the IP Department at IBM in Canada and the first to lead it. She was also the first woman on the senior management team of IBM’s global IP Law department in New York. In addition to her illustrious career at IBM, she gave of her time and expertise to IPIC committees, including the Patent Agents Examination Standards Committee, the Professional Regulation Committee, the Patent Cooperation Treaty Committee (during a period of intense PCT reform) and the Patent Joint Liaison Committee. She has been recognized by her peers when she was voted in as a Director of the College of Patent Agents and Trademark Agents. This is an award truly deserved in recognition of Leonora’s contributions to IPIC. – Carol Hitchman

After thoroughly enjoying the excitement of twelve years living outside New York City, Leonora has returned to Toronto where she lives with her husband and bichon frisée. Leonora is a lifelong devoted opera and ballet fan, having attended both from early childhood. Since the pandemic started and into retirement, she has been spending more time at home, working on her gourmet cooking skills. She has mastered risotto, an excellent vinaigrette, homemade tartar sauce, tomato sauce for spaghetti from scratch and, most recently, cooked beets. She loves yoga but has only been doing virtual classes since March 2020. She has vowed to learn bridge so that she can play with a close friend!

*Please note due to her current role within the College of Patent Agents & Trademark Agents (CPATA) the membership to IPIC that is provided to Member of Distinction Award winners will not commence until such time Leonora Hoicka’s tenure with CPATA is complete. 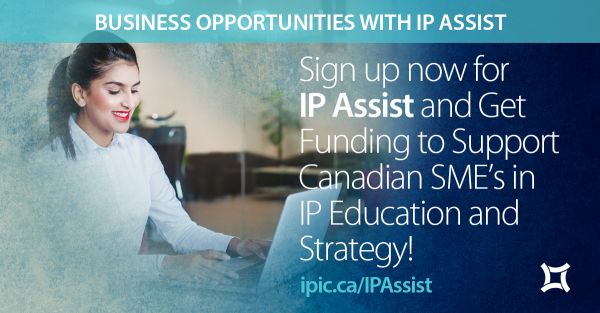