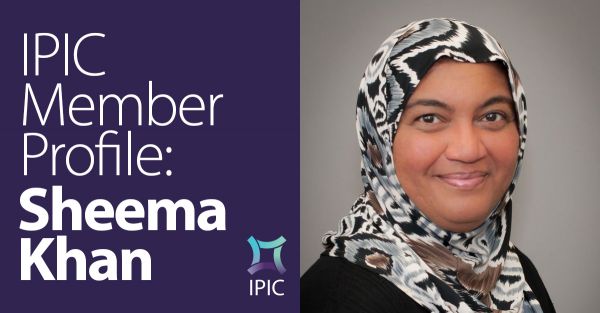 This is the first edition of IPIC's new member profile series on the UnscrIPted blog, which features a monthly interview with a Canadian IP professional to discuss their career accomplishments, interests and overall outlook on the IP profession.

Sheema Khan is a patent agent with the intellectual property strategy division at Stratford Managers Corporation in Ottawa, Ontario. She has a BSc in Chemistry from Mcgill University, a Masters in Physics and a PhD in Chemical Physics from Harvard University and a Post-Doc in Chemical Engineering from MIT. She has been named as an inventor on over twenty patents.

IPIC: What encouraged you to pursue a career in IP?

SK: It was by accident.  I started as an R&D scientist at a pharmaceutical start-up in Montreal. My first task was to analyze the patents of our main competitors. I had never touched a patent before. It took about a year, and to be honest, I hated it, since I had to learn a lot about patents on my own. I vowed never to have anything to do with patents.  After a few years, the company was moving to San Diego, and we had just bought a house in Ottawa. We did not want to move. A friend suggested I look at law firms as they were hiring scientists with PhDs to work in IP Law. I thought, “why not?”. I joined a national law firm and obtained a first-rate foundation. I found the intersection of law, science and the English language fascinating. Once I passed the patent agent exams, I was able to choose lower-profile firms that provided a balance between career and family. Not to mention the chance to interact directly with inventors.

IPIC: What is the most memorable case/client you’ve worked on/with and why?

SK: An inventor contacted me, convinced he had found the holy grail. He described how he was drinking a cup of coffee at Tim Horton’s, and accidentally dropped a piece of chocolate onto the lid.  It did not drop into the coffee. He removed the chocolate, and once he started to drink his coffee, it had the flavor of the chocolate. He figured the brain had been fooled by the scent of the chocolate. And that was his eureka moment – scented coffee lids. Instead of paying $$$ for flavoured coffee, pay a fraction for a scented lid that will give the same experience: vanilla, hazelnut, caramel, etc.  He was ready to invest thousands. I suggested that I perform a search of patent databases to make sure no one had filed for such an invention. He was going to say no since he had never seen this invention. I convinced him to spend a few hundred dollars on a through search. And, alas, I found a patent application that disclosed the same idea. He was devastated. The silver lining was that he had not poured thousands of dollars into the venture.

IPIC: How has being an IPIC member benefited you?

SK: I have benefited from the knowledge provided by various IPIC platforms – especially the topical webinars.  I have also enjoyed the various committees that have provided a window into different aspects of IP. And most of all, it has been inspiring to network with dedicated, caring professionals.

IPIC: Where do you see the industry headed over the next five years?

SK: Hopefully towards greater harmonization between different jurisdictions.  In Canada, we need to increase IP awareness – starting in elementary schools, so that the next generation will see IP as a tool to be leveraged, not a scary, expensive black box.  We need to help SMEs understand the importance of IP, help them plan strategically, and take their rightful place in the international market.  Canadians have incredible innovative creativity – it just needs to be leveraged properly.

IPIC: What is your biggest challenge as an IP professional?

SK: In the early years, it was balancing family and work.  Thankfully, we have seen a move towards more flexibility by (some) law firms. Now that the kids are independent, the challenge is keeping up to date with the evolving law on software and AI patents in all jurisdictions. This area of IP law is especially challenging in the US. It will be good to have greater clarity on what constitutes patentable subject matter. It will be interesting to see how IP laws deal with the next technological breakthroughs – e.g quantum computing.

IPIC: Which area of IP interests you the most, and why?

SK: I would say the areas of Artificial Intelligence and Machine Learning, since there is so much room for creativity in these areas – especially as they apply to diverse fields of industry. I am also looking forward to patent law as it pertains to quantum computing. These areas are of interest because of my background in mathematics and physics. In addition – I’d like to see how we, as an IP community, will play our part to advance the recommendations of the Truth and Reconciliation Commission Report. What can I, as an IP professional, do to contribute towards national reconciliation?

IPIC: If you could change anything about the field of Canadian IP, what would it be and why?

SK: In the area of patents, I would request greater harmony between MOPOP and Canadian jurisprudence – especially in the area of software patents. We have the bedrock cases of Whirlpool and Free Trust regarding claim construction. Yet, policy at CIPO seems to point in a different direction.

IPIC: What is something your peers wouldn’t know about you?

SK: I am a huge hockey fan – having grown up in Montreal during the 1970s when the Canadiens won Stanley Cups almost every summer. I attended many Stanley Cup parades, and played hockey growing up. While I wasn’t good enough to play on the McGill women’s varsity team, I did play rec for the Physics team (we were called the “Tachyons” – after a subatomic particle). When I was a grad student at Harvard, there was no women’s rec league. So, I started one for the women of Harvard. A tea-totaling Canuck! I encouraged my students – some who had never been on skates – to try it out. They loved it! And finally – I still have my hockey card collection from the 1970s neatly tucked away. I am also a columnist (for the Globe and Mail since 2002) and an author. The title of my book: “Of Hockey and Hijab”.  No surprise there!

IPIC: Do you have any advice to those entering the profession?

SK: It is a rewarding profession in all aspects.  Be patient. Pass your exams (use all of the superb resources out there) and then chart your own course.  The intellectual creativity out there is just amazing. And you will help individuals and companies leverage their intellectual efforts towards higher returns.  Also – be prepared to always learn – about new technologies and the evolution of IP law.

If you would like to be featured in our monthly IPIC member profile series, please e-mail IPIC's Manager of Communications, Stephanie Naday at snaday@ipic.ca.